At the beauty parlour!

Dawn embraced daylight , Sun's mighty radiance gave way to twilight , tapestry of evening sky paced slowly into dark night's deafening silence . Days passed into weeks , weeks into months and months into years.... I bid adieu to my carefree years , and plunged into an entirely rewarding and responsible phase of my life , motherhood . As I cradled my new born , just feeling his soft tender body , just staring at his innocent little face , nothing around me seemed real except that single moment ! 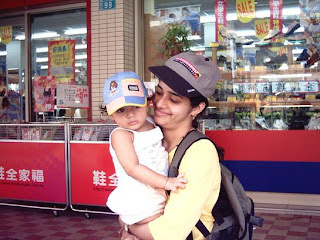 As I was moving ahead in this life's voyage , it was time for me to pack my bags for my next nomadic exploration . We flew to Taiwan , an island off the coast of China , with our 2 month old baby . This was not just a journey to a new culture and diverse surroundings : it was more of a journey within . It can be called a spiritual retreat . I was shedding my self centered thoughts which were now dominated by my new born baby . It was a time when my priorities unknowingly changed . I was never tired of the busy days and sleepless nights....My batteries never failed.....I was continuously charged by the unconditional love of my baby .

I loved our routine evening walks , when the tiny eyes brimmed with joy and curiosity , refusing to blink and appeared like cameras without shutters! I enjoyed trying to decipher the pictorial calligraphy on the roads , and was amused by the Chinese script . One of PP”s colleague was a victim of a very embarrassing situation once . He had once been to Taipei and was on his way back to his apartment . He was careful enough to have a slip of paper with the place he wanted to go , written in Chinese . In the bus stop , he stood with this slip of paper above his head like a placard , and his face brightened up with a smile . All passers by just stared at him as if they were watching an insane drama . He waved the large slip of paper to all the bus drivers , but in vain . When he could no longer stand the sarcastic stares , he ventured to try his hand at gesturing.... with expressive facial expressions and hand gestures he blabbered to a lady in the bus stop about his destination . She burst out into laughter at the mimicry , for she could follow English . She also pointed out that all the while he was holding his thoughtful placard upside down . How was he to know ? He made it a point to mark the top and bottom of his future placards .

Such situations can always be treasured for future entertainment .After our three months stay in Taiwan , we befriended a newly married Indian couple . We started spending our afternoon's together , our gossips filled with nostalgic memories , recipes and all girl's talk . She was a very beauty conscious person and came up with an idea of visiting the beauty saloon . Though I hesitated in the beginning , I was bribed by the luxurious thoughts of a relaxing facial .

I hung my baby on his sling and one afternoon the two of us marched towards the nearest beauty saloon . As soon as we reached there , we were pounced upon by two ladies like vultures on their well awaited prey . My friend wanted to shape her eye brows ! And she began exploring her communication skills...after a good fifteen minutes monologue she seemed successful in letting her audience grasp her thoughts ! She beamed with success as she reclined on the ornamented chair . One lady swabbed my friends face clean while the other went to collect her tools for shaping the eye brows . She returned with a new razor .....and started shaving her precious signs of beauty ! My friend was unable to move for she was soothed by a razor and my appeals seemed to vaporise in the air .Should I explain more on her looks and expression when she beheld her own reflection!

Now it was my turn...I needed a way out of this dilemma ....My only Saviour was my son who was fast asleep clinging to me ....I slided my hands on his thighs and pinched him....he burst out into loud sobs !I had succeeded ! Trying to cajole my baby I rushed out of the parlor....Shortly my friend joined me after having payed for her makeover ! She spend hours before the mirror with a black eyebrow pencil trying to make variations of curves.....and shut herself in her apartment for weeks till she thought herself presentable .

I thanked my darling with hugs and kisses , and couldn't stop my giggles at the aftereffects of handicapped communication!

Posted by Nanditha Prabhu at 9:27 PM

So, now i know the secret of kanna's cry once in a while :).

you have narrated the story so well, with good preamble, the experience in the bus stop...

i do understand, when it comes to loving your kids, your batteries never failed... and would never fail too... you are a role model for other mothers... and you got recognized too for that..

we enjoyed your "at the beauty parlour". sweet memories of your childhood r bubbling in our mind.keep writing.
amma,....appa.........

Great to see that u r keeping ur talents alive. Enjoyed reading ur blogs. Keep at it!

I really dont know what to write...laugh or cry out in horror!!the first anecdote was quite hilarious...but the one at the beauty parlour....oh my..this is such an eye opener..wouldnt dare to do such thing s when I go to some place like this :)))

one can't help smiling, imagining the faces of your friends at the bus stop and the beauty parlour ..... you can make a collection of all these anecdotes .... they are worth publishing .............

thanks for visiting my blog...glad you liked the recipe...you have a lovely blog..for sure I will visit more often...

Both u n ur baby look GORGEOUS!

cute pic Nanditha!hugs to ur baby!

hey besides all this you look very pretty and the lil one is cho chweet!

You have a nice blog here. I did enjoy the parlour incident!! :) You and the little one are both good looking :)

My vision , thanks for the compliment.
Damodaran , I have started really enjoying this ,and I think I will keep writing . Thank you !
mj , welcome and keep visiting .
Mishmash , so I made you laugh! atleast you got to know that what you need to be beware of!
Naveen , I do have a collection of such anecdotes ....What did you say publishing ? Hmmmmm.....need to give it a thought .
Dilip , welcome !
Keshi , Little light , Sharmi ....thank you all for your sweet words!
Jyothsna , Piyush , keep visiting!

That was just hilarious!! I enjoyed reading both the episodes in the post.