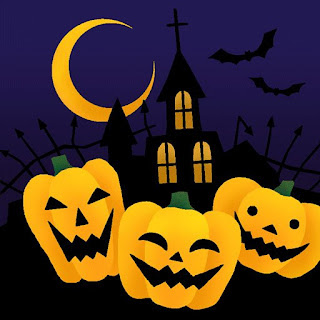 "I am going to be a spider witch"....." I 'll be a mermaid"... I am a princess"..." I love being a butterfly".....each one was eager to share the details of their costumes for the Halloween. This was my first Halloween and I was amused at the excitement that filled the innocent faces of the kids who had gathered home for their regular dance sessions. I asked them " What is Halloween?" and the answer I got was , It was a day when we will get a lot of candies....and we get new costumes for our costume party!"

Then I got a note from my son's school regarding the Halloween party! They were supposed to go to school in a costume and take with them gifts or treats to share with their friends. So I went searching for the costume of his choice to the mall. The whole mall was filled with the spirit of Halloween. there were spooky corners which sold scary masks and costumes...,there were special offers for miniature chocolate bars and candies....on the shelf stood pumpkin shaped pails with different facial expressions ...!!!
"Amma , I don't want to wear any thing scary!" ......My son came up with his demand!....his eyes stuck on the red costume of a fire fighter and he was satisfied.


Still I did not get a satisfying answer regarding the roots of this festival which seemed to have gained a wide popularity , second only to the Christmas. The festival is now commercialized , and the real reason behind the festival seemed to be missing. I digged a few books and searched the internet and found out that this was originally a Celtic festival with its roots in Ireland.It is named after " All Hallows even " or Eve of All Hallows Day or All Saints Day.Romans who later invaded the Celts seem to have blended in their customs into this festival.It originally symbolized the end of summer and beginning of the dark period or winter.It was called "Samhain" by the Irish, who celebrated this day with bone fires and bambrack( a traditional fruit cake).It was also believed to be the time when other worldly creatures roamed the planet ! There fore who ever , left their homes disguised in costumes in order to be in sync with the outside atmosphere.They used to roam around with a lantern made from gourd(jack o lantern.... which represented the plight of jack the farmer whose spirit roams around, who is denied entry to heaven or hell due to a spell from the devil).gourd was later replaced by pumpkin, which is more abundantly found! The poor in Ireland used to knock at doors and beg, and in turn would pray for the souls of the bereaved. This has been transformed into "trick or treating" today, where children run from door to door in their costumes and are given treats !

The Roman Goddesses Pomona ( Goddess of fruits) is remembered by the custom of bobbing of apples. This is a game where apples and coins and thrown into water and is supposed to be picked up with out using the hands.

Though the festival is not celebrated in its olden significance, it is a great time of the year ...when each house hold welcomes you with the colors of autumn, signs of harvest, symbols of ghouls and ghosts and witches....the pagan festival is redefined to fit into today world... celebrated with a difference!
Posted by Nanditha Prabhu at 6:33 PM

So how was the costume parade at the school.? Did you go with him..? Hope kids had fun getting all those candies....:) Did you carve a jack -O - lantern for them.?

We don't have it over here hence it was truly informative and your writing so simple.

mishmash,
Kanna enjoyed halloween. He TELLS ME HE CANT WAIT FOR THE NEXT HALLOWEEN AND IS ALREADY THINKING OF WHAT TO WEAR?the best part was of coursr the candies! my cupboards are full of them still!no! we didn't carve a jack o lantern! we made a pumpkin sambar! he he!

Kanna must have thoroughly enjoyed the halloween and happy to note that he is looking forward to the next year. I think, such celebrations and participations would help Kanna shed his inhibitions and shy nature. What did Sree do on Haloween day? The pumpkin sambar.. yummy..

Nice post nandu.. thanks for putting the haloween postcard...

That was new info to me. Wanted to know ever since I read 1st Harry potter. :-D ... btw nice blogs.

yeah..i was in disneyland during the halloween week and remember the kind of euphoria that was among the kids..probably we would have to be kids again to go through that..;-)