I was waiting with Sree my toddler, for my elder son Kanna's school bus to arrive. I couldn't help wonder at the tapestry of nature , as my eyes fell on the swaying colorful trees as they performed their autumn dance. All the colors were compressed in the costumes these trees wore , creating a divine aura of joy and bliss.
" Anna bus , Anna bus" , yelled Sree as he heard the approaching yellow school bus.
" Amma, Anna come in magic school bus. Sree also go in magic school bus with Anna" he added.

Kanna came running , his face beaming with pride , his out stretched arms eagerly waiting for a warm squeeze and a loving hug. He started elaborating the days events at school... trying not to miss every opportunity at arousing jealousy in his little brother.

"I have something special to give you " said Kanna as he opened his school bag and pulled out a few papers. On it were given detailed recipies of apple sauce , apple sauce cake and apple muffins.
" Amma, I am going to help you make these!" he declared.

There was home work to for me .. it said " write why is your child the apple of your eye?"

" Amma, my teacher lives near an apple orchard!
Amma, you know what , my friend Zac brought apple sauce to school today!
Amma , you know there are red , yellow and green apples.......if we slit open an apple we can see a star...........

He went on and on ....and apples were the main topic of discussion through out the day!

We finally decided to go apple picking at "Erwin Apple orchard", which was a 20 minute drive from our place.

On Saturday morning , off we went to the apple orchard. We first took a ride around the farm on the farm wagon.. trying to figure out which variety of apples we would fill in our plastic bag , that we bought at the counter.We passed the corn maze , the pumpkin patch and finally arrived the apple orchard.

Red and golden balls were dangling from small healthy looking trees , which was a real treat to the eyes. Some trees were covered with these from top to bottom , that even my two year old could easily pluck them with out any one's help. The golden delicious were so tempting and inviting that it reminded me of Adam and Eve's first temptation. Our hands involuntarily held the golden fruit , and it came off its branch with a slight twist. Before long all of us were busy munching the juicy treats as we roamed through the rows of apple trees trying to research on the juiciest ones. 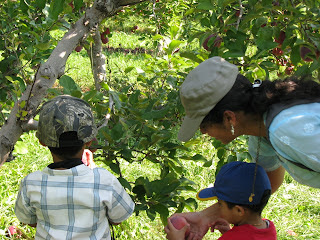 Adjacent to the apple orchard was the orange pumpkin patch with huge pumpkins....Kanna went in search of the perfect pumpkin which he could carry ...the long search finally came to an end after trying to lift each pumpkin we saw ....finally we discovered kanna's perfect pumpkin. 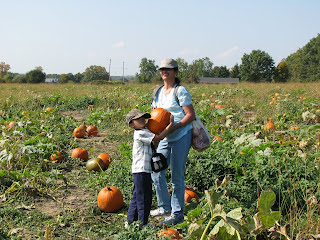 After a long day of apple diet .... we once again succumbed to the freshly made apple donut and apple cider before heading for the games that were organized for kids. 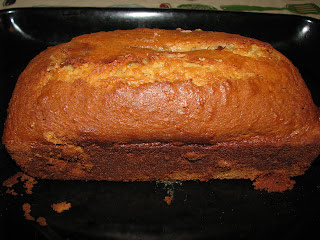 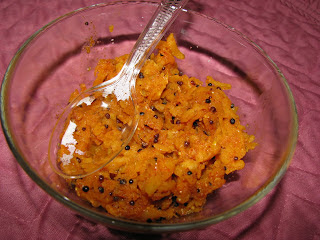 Back at home , we made apple pickle, apple sauce and apple cake .....while Kanna stirred the dry ingredients , Sree and Appa blended the wet ones .....we all anxiously waited for the cake to bake ....its aroma arousing our taste buds....As the kids savored the apple cake ...I could catch a twinkle in their eyes , a glow on their faces !!!
Posted by Nanditha Prabhu at 7:12 PM

apple pickle sounds interesting...can we have the recipe please?

your cake looks good. I guess it would have been exciting

isn't it fun going farm picking?!!that too with kids! nice photos ,thanks for sharing and trying out the laddu:)

Am sure u had lots of fun at the orchard and also must have realised that they taste so much better than the ones we get at the store. apple pickle sounds interesting as well....its quite chilly out here, anything spicy , thick and rich is welcome now :)

Happy to see Kanna and Sree picking apples and pumpkins from farm... Its very different feeling, which we had enough during our childhood and today's children generally miss such fun... And you have transformed the apples picked to pickles and cake... hmmm yummy...

The cake looks very good..have never heard of apple pickle..!!very interesting..start sathvika soon..at least one post a month..:)
Nice to note that payasam came out well, Nandu..:)
..Thanks a lot..

its too good to c u and kids on the farm...nice scenic pic.....and also ur cake and pickle mouth wateres.....

Superbly explained, yet so simple to the core.

I think I am going to like it here.
Thanks for the visit, nandita.

well that was a perfect day indeed !


I don't mean this in a bad way, of course! Ethical concerns aside... I just hope that as technology further innovates, the possibility of downloading our memories onto a digital medium becomes a true reality. It's one of the things I really wish I could see in my lifetime.